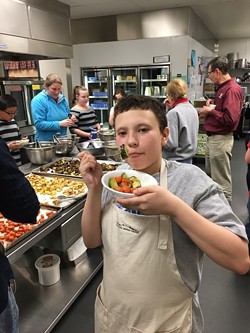 Three local chefs will square off in a timed cooking competition using only ingredients typically found at a food bank in the first annual Chef’s Challenge on Sunday in Pullman.

Modeled after the popular television show “Chopped,” the event is equal parts entertainment, education and benefit for Pullman’s Community Action Center. Just like the television show, the three competitors will have a limited time to prepare their creations -- around 40 minutes for an appetizer, followed by around 50 minutes for an entree, said Jeff Guyett, executive director.

Additionally, they’ll be presented with a “mystery ingredient” right before the competition begins that must be featured prominently in each dish that is prepared.

The chefs in Sunday’s competition have an additional challenge beyond those on television: they can only access foods in their “pantry,” all of which are items typically found on the shelf at the Community Food Bank. They be choosing from things like canned tomatoes, green lentils, canned black beans, pasta, canned tuna, as well as fresh romaine lettuce, which is grown in the food bank’s hydroponic garden and distributed when the food bank is open.

“It’s an additional challenge, but it should be that way because that’s what our food bank patrons face every week,” Guyett said. “They get what they get.”

The results will be judged by Pullman mayor Glenn Johnson, Joan Swenson of Paradise Creek Brewery, Chrisi Kincaid of WSU and a guest judge selected from the audience through a raffle at the event. That person will be seated prior to the presentation of the appetizer.

Proceeds from the event will go towards the completing the community kitchen at the Community Action Center. The small space, formerly used as a food bank, will serve as a teaching kitchen, as well as a place to park donated food for distribution, Guyett said.

The competing chefs are Will Wohlfeil of Southfork, Matthew Lasof of Washington State University’s Northside Café, and Ryan Avery, a local amateur chef. The event will be emceed by Jamie Callison, executive chef at WSU, who will talk the audience through the competition, explain the ingredients being used and discuss the community kitchen project.

COST: $15/person in advance or $20/person at the door; tickets can be purchased at the Community Action Center or online at cacwhitman.org