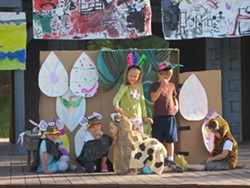 Idaho Repertory Youth Theatre students, grades K-3, perform a play based on an African myth on the outdoor stage in last year's session, "Acting the Story: Tales from Around the World."

“With kids performing, really at any age, acting skills are the secondary goal,” said Zac Curtis, who will work along with his wife, Mindy, and Suzanne DuVal, IRTY education director, to lead summer workshops. “Most of these kids aren’t going to grow up to be professional actors.”

But Zac said with established skills, they will learn to be good people.

“A lot of kids sign up that are kind of shy and may seem like a strange fit, but I think for a lot of kids, it gives them a lot of confidence and it gives them the opportunity to collaborate with kids their age to create something together,” DuVal said.

From kindergartners to 10th graders, three workshops will be offered for each age group on separate weeks.

“We do have an ensemble based approach, where (children) get equal performance time, unless they don’t want to help,” DuVal said. “Sometimes they change their mind in the course of the week and that’s fine, because we find another way to get them to participate.”

For the younger kids, K-3, DuVal said they will investigate different cultures.

“We really talk about how stories evolve in the cultures and why different cultures come up with different myths to explain what we don’t understand,” DuVal said. “We try to look at a dance from a different culture or masks or art. And how other cultures live.”

Because classes are three and a half hours, there will be morning snacks, too.

For the fourth- to sixth-graders, one of the sessions, “Young Shakespeareans” will explore a textual analysis of Shakespeare, as well as character development, stage combat practice, period dance and facts on Shakespeare’s life.

Auditions for “The Merry Wives of Windsor,” an IRT professional production, take place June 29, so “Young Shakespeareans” is recommended for children interested in auditioning.

The oldest age group can practice the art of improvisation in one of the sessions dubbed “Acting Techniques: Improv Workshop.” By the end of the session, students will have learned theatre games, skits and team building exercises to create their own comic skit.

“We offer scholarships on a need basis,” DuVal said. “So, if they have a financial need (it helps) offset the cost of the camp.”

Students will showcase their skills at 5:30 p.m. Friday, following each week-long class. While DuVal said family and friends primarily view the showcases, they are open to the public, too.

Hopeful participants can register online at www.uidaho.edu/class/irt/irty or preferably by email at sduval@uidaho.edu. Day-of walk-ins are allowed as long as a parent is present to fill out an insurance waiver.

Idaho Repertory Theater Youth Summer Workshops: All classes are 9:30 a.m.-12:30 p.m. Grades K-3 Acting the Story: Tales from Around the World: 3 Sessions: June 10-14, June 17-21 and June 24-28 Each week explores a different world culture and creates a play based on a tale from it. Students explore theatre games, ensemble building, movement, dance, rehearsal and performance and can sign up for one, two or all three sessions.

Grades 4-6 Create a Play Workshop, June 10-14: Students write, stage, design and rehearse a play that will be performed at the Friday showcase.

Making a Scene: Design Workshop, June 17-21: Students visit the costume shop, scene shop and lighting booth of the Hartung Theatre. Then they discuss a script and create a costume design, a make-up design, a set design model and a scenic rendering for it.

Play Devising Workshop, June 24-28: Tell your own story and express your ideas using theatre games, improvisation and their own personal experiences to create a group performance piece.