From auditions to dancing to skating to shopping, nothing warms up a February day like getting moving. But know when it’s time to kick back and take in a lecture or two.

If you’ve always wanted to “Climb Every Mountain” or be involved in a puppet show about “The Lonely Goatherd,” your last chance to audition for the well-loved musical “The Sound of Music” is 6-8:30 p.m. Feb. 13 at the 1912 Center in Moscow. Callbacks will be Feb. 25 and 27.

Auditioners should prepare a one-minute performance and sheet music from a Broadway-style song, according to the theater company, and an accompaniest will be provided.

Additional information may be found online at apodproductions.org/auditions. The center is at 412 E. Third St.

“Love You to the Moon and Back,” a Valentine’s Day-themed planetarium show, will be shown at 6:30 and 8 p.m. Feb. 14 in the Washington State University planetarium on the Pullman campus.

The planetarium is in Room 231 of Sloan Hall, and the show will explore all things romantic within the heavens such as mythological stories of love, as well as some of the hottest things in the known universe, according to the planetarium website.

Admission is $5 (cash or check only) and free for ages 6 and younger.

The monthly Pullman Winter Market will be open from 10 a.m. to 2 p.m. Feb. 15 at the Brelsford Washington State University Visitor Center in Pullman.

The final two winter markets of the season will be March 21 and April 18.

Members of the band specializing in Irish music are John Watkinson on whistles, Lisa O’Leary on hammered dulcimer, Paul Smith on fiddle and Dave Roon on flute and bouzouki. Caller for the folk dance will be Susan Dankovich.

Cost is $6 for Palouse Folklore Society members, $8 regular price, $5 for newcomers and free for children.

Two sessions of a Valentine’s Day-themed “Sweetheart Skate Night” will be held Feb. 15 at the Gladish Community & Cultural Center gym in Pullman.

The family-friendly sessions are from 3-5 p.m. and 5-7 p.m., and the cost for each is $7 with skate rental and $5 without rental. Concessions will be available for purchase, and music to skate by and games also are planned.

The event is put on by the Rolling Hills Derby Dames. 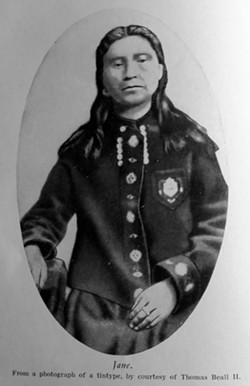 Jane, daughter of Nez Perce Chief Timothy, is believed by some to have guided E.D. Pierce in the Clearwater region on his quest for gold.

Historian Mary Minton of Clarkston will give a lecture about the discovery of gold in this region at 7 p.m. Feb. 19 in the Lewiston City Library.

Minton’s presentation is titled “Perceptions Over Time: Case Study in How History has Viewed the Gold Discovery that Started in Idaho,” and will include a variety of images pertaining to her talk. Her lecture is one in the Nez Perce County Historical Society Lecture Series.

The lecture will focus on what was happening in this region in 1860 when E.D. Pierce left Walla Walla and traveled east hoping to prospect for gold in the Clearwater region. Minton will delve into who guided Pierce on this trip: Some say it was Jane, daughter of Nez Perce Chief Timothy, while others say that couldn’t be true.

Minton is a member of the historical society’s North-Central Idaho Speaker’s Bureau. The library is at 411 D St.