‘Fighting with My Family’ a winning takedown 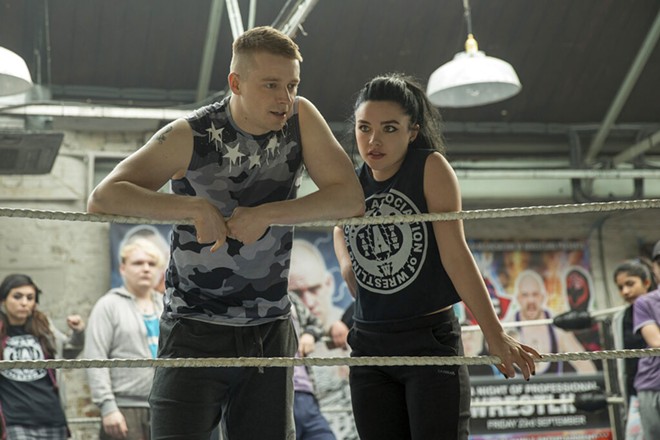 Stepping into the ring of film biopics, “Fighting with My Family” is the underdog that is able to stay strong, keep fighting and pin down a win.

Hollywood has told the rags to riches stories of musicians, dancers, Olympians and athletes from football, baseball, basketball and soccer, but it’s been (mostly) quiet on the wrestling front, until now.

Based on a true story, “Fighting with My Family” starts with the Knight family: Ricky (Nick Frost) and Julia (Lena Headey) and their two kids, Zak (Jack Lowden) and Saraya (Florence Pugh). They are a wrestling family in Norwich, England. They wrestle as a family. They train as a family. They coach as a family.

Zak and Saraya’s dream (as well as their parents’) is to make it to the WWE (that’s World Wrestling Entertainment for the uninitiated), the Hollywood-Super Bowl of wrestling. Finally, their moment arrives when Zak and Saraya are chosen for tryouts, but things don’t go as planned. Saraya gets to move on to America for a chance at the big stage. Zak isn’t chosen and must stay behind. The film then follows them both as their lives change forever.

What makes “Fighting with My Family” different from other stories of small-town-girl-plucked-from-obscurity-to-follow-her-dreams, is that it follows her brother as well.

Audiences see Saraya struggle in her training. She doesn’t fit in her new world. The pale, black-haired goth girl with a British accent doesn’t get along well with the other girls -- bleached-blonde, spray-tanned former models, dancers and cheerleaders. In the wrestling world, she stands out a bit too much. When she’s not in physical agony from training, she’s in emotional turmoil from missing her family.

Zak goes through a similar identity crisis. His whole life he has followed one dream, only to have it crushed. If that weren’t bad enough, he must watch as his sister lives out the life he wanted. He is angry, but trying to keep up appearances.

While “Fighting with My Family” could have followed only Saraya’s story, telling both tales creates a more engaging narrative. You get training montages, mixed with Zak’s decline. You wonder if Saraya’s going to make it to the WWE and whether Zak’s going to recover from his downward spiral.

Pugh and Lowden’s acting give the characters and storyline even more of a punch. Audiences can find something in either character to relate to, from Saraya’s homesickness, to Zak’s disappointment, to the search for identity both undergo.

As a disclaimer, I don’t follow wrestling, so perhaps the real thing is more exciting on TV than a reenactment on the big screen. However, I can say that this movie has the moves. The wrestling on camera is fun to watch as characters go from training to actual fights in the ring. Most importantly, it has characters you can root and feel for. That’s what makes “Fighting with My Family” a champion, that and Dwayne “the Rock” Johnson’s cameo appearances as himself.