‘Hellboy’ is a not fun trip on the highway to hell 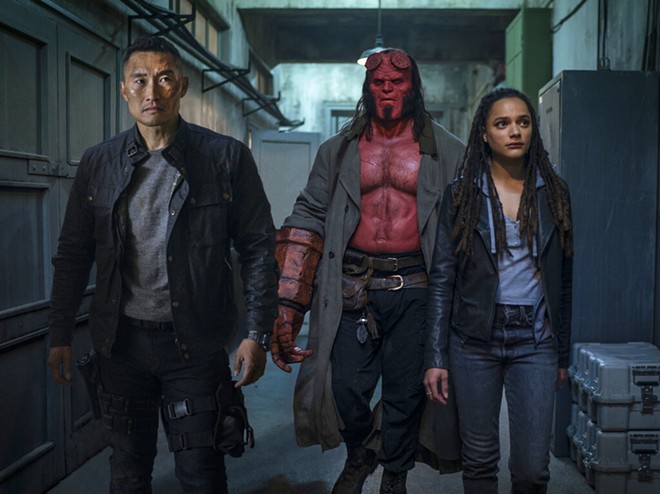 Mark Rogers/Lionsgate via AP
This image released by Lionsgate shows, from left, Daniel Dae Kim, David Harbour and Sasha Lane in a scene from "Hellboy."

One out of four

“Hellboy” is like Dante’s “Inferno,” it’s a tortuous tour of the many circles of hell for the audience.

The first circle in the tormenting viewing of “Hellboy” is the plot. It’s supposed to be about how Hellboy (David Harbour) defeats the Blood Queen (Milla Jovovich) to prevent her from wiping out humanity with a plague. Instead, it lands us in limbo, traveling to unnecessary side stories — fighting giants and warthog creatures — before finally getting to the point.

The second circle is the lackluster characters. In theory, Harbour is perfectly cast as the character, but the meaty role of someone who looks like a bad guy but is all good is lost. The script doesn’t allow Harbour develop Hellboy’s humanity so everything else suffers.

That brings us to the third circle. The gluttonous special effects department went all out on blood and gore and it shows, a little too much. The end result is that the gross and unnecessary carnage makes the violence look campy and dumb.

The fourth circle adds another layer of punishment in the visual effects department. The special effects are so poorly done they seem unfinished. This includes a cartoonishly animated dream sequence. The prosthetics used to make Harbour into Hellboy remove his lips, which is distracting every time he talks and limits his ability to express emotion.

However, most of the film’s problems can be boiled down to a poor script, the fifth circle. In addition to the rambling plot, the script’s attempts at humor fall flat and feel forced. The jokes are mostly Hellboy talking to himself, clearly written for the audience since there is no reason for Hellboy to be talking to no one.

Audiences get very little of the supporting cast, including Maj. Ben Daimio (Daniel Dae Kim), who has monstrous problems of his own, and Alice (Sasha Lane), who speaks to the dead. Instead of showing audiences who these characters are, the screenwriters tell us with lazy flashbacks in an agonizing trip to the sixth circle in the inferno of “Hellboy.”

That ties right into the seventh circle, the lack of action. While the film has over-the-top violence it doesn’t amount to action that presses “Hellboy” forward, which leads to an anti-climatic climax.

The eighth circle is the disappointment that “Hellboy” had all ingredients of a good film: Complex characters and a classic superhero with a twist of the supernatural and magic. It still manages to fail.

That brings us to the ninth and final circle: Betrayal of the fans. The filmmakers forgot to give its film a soul. There is hardly any joy or love in “Hellboy,”

If “Hellboy” had released 15 years ago (which the Guillermo del Toro version did), the film would have been adequate. But when you’re releasing a comic book movie in the world of the Marvel Cinematic Universe and DC Extended Universe, a month after “Captain Marvel”and a week after “Shazam,” you have to give the audience something they haven’t already seen. With a character like Hellboy, that would have been easy for the filmmakers to do, but they didn’t.

Until they figure it out, I’ll be watching del Toro’s “Hellboy.”