Humans are the questionable species in RTOP's adaptation of "The Birds" 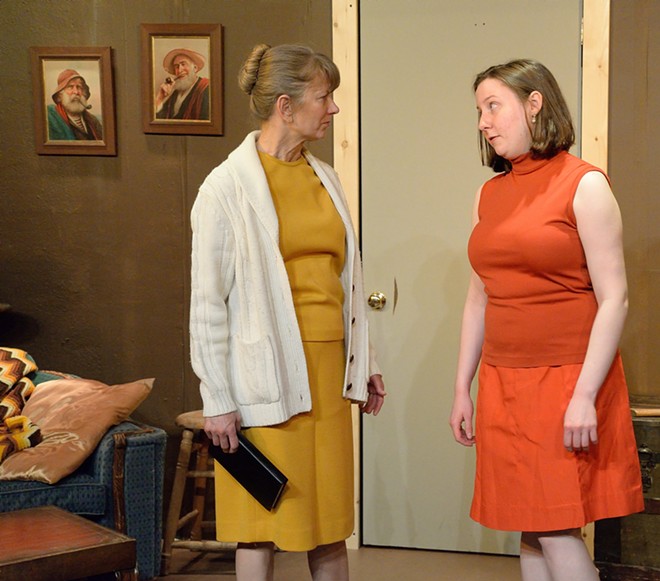 Trish Gardner plays Diane and Susanna Opsal plays Julia in Regional Theatre of the Palouse's adaptation of "The Birds."

PULLMAN -- When society collapses in unexpected ways the real story begins with how people react.

The formula is the starting point for popular shows like “The Walking Dead” and “The Leftovers.” It was also the basis of Daphne du Maurier’s 1952 short story “The Birds,” made famous in film by Alfred Hitchcock.

Regional Theatre of the Palouse opens its adaptation of “The Birds” tonight in Pullman. Strangers Nat and Diane seek safety from flocks of attacking birds in an isolated house. While they find shelter they do not find peace or comfort. There's no electricity, little food, and a nearby neighbor may still be alive and watching them. Another refugee, the attractive young Julia, arrives with news of the outside world, but her presence brings discord. Survival becomes doubtful as paranoia sets in.

The After Dark series play is directed by Randy Emerson in his debut as an RTOP director. A sixth generation Pullman resident and Washington State University graduate, Emerson worked as a Disney Imagineer and has a master’s degree in photography. His “Bird Noir” photography collection will be on display at the theater during the production and during Pullman’s Artwalk May 12-13.

Regional Theatre of the Palouse will hold auditions for its 2017-18 season next week. Auditions are 6:30 to 9 p.m.May 2-4 at 122 N. Grand Ave., Pullman. The season’s shows include the Broadway hits “All Shook Up,” featuring music by Elvis Presley; and “A Christmas Story, the Musical,” which puts the classic movie to a musical score. The season also features the 2009 Tony Award-winning Best Play “God of Carnage,” a dark comedy about parents who completely forget their manners.