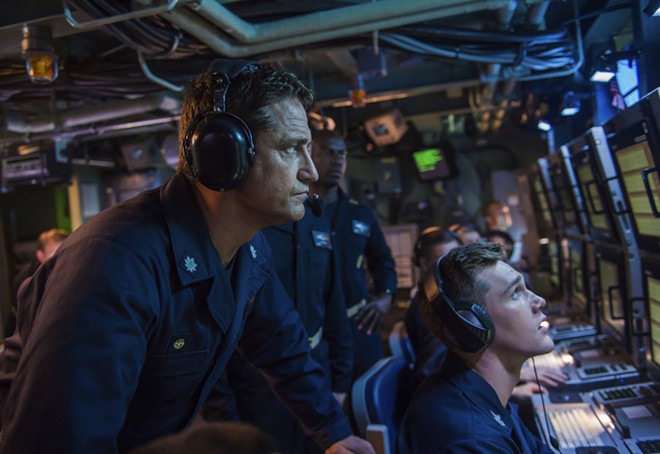 Two out of four

“Hunter Killer” aims for smooth sailing as a military espionage thriller but the longer the film takes, the deeper it sinks into the depths of mediocrity.

The story begins when untested submarine captain Cap. Joe Glass (Gerard Butler) is given command of a submarine to investigate the disappearance of another submarine.

As Glass looks into the mystery, he discovers a much bigger conspiracy afoot involving a Russian military coup. Glass then receives orders to rescue the Russian president in an attempt to peaceably resolve the issue. If not properly handled, the mission could lead to outright war between the U.S. and Russia.

There are many moving pieces within the plot: the crew of the submarine, the Russian military, a special ops team on the ground, the Department of Defense headquarters. This makes for too many sides to the story. The tension would have greater impact if it was solely told through the submarine crew.

Splitting the story in five different ways also doesn’t allow space for the characters to be developed or for the audience to become invested in them. They are uninteresting pawns in the story with no impact. Out of the cast, Butler gives the strongest performance but his character is an idealistic “I trust my gut” type that feels more like a trope than a person.

The uninspiring characters carry a just as unexciting film. Sure, there are some tense “are they going to crash/get hit with a missile/explode?” moments, but those short thrills are between long drawn out scenes of people arguing over what to do and sailors looking at sonar devices.

It is also hard to follow at times, unless you have some kind of military background. While a movie shouldn’t point out the obvious, audiences should be able to follow the story. As Glass, the Russians (who all miraculously speak English), and other officials spout jargon, military terms and commands expecting the audience to know what it means and if it’s good or bad. So, when the film does get to the point where something is happening, all you know is that something is happening, you might not know what that is.

“Hunter Killer” isn’t the worst movie, but it’s far from the best. It doesn’t rise to the level of high-quality nor does it completely sink to the bottom. It mostly just floats in that in between space of “meh.”