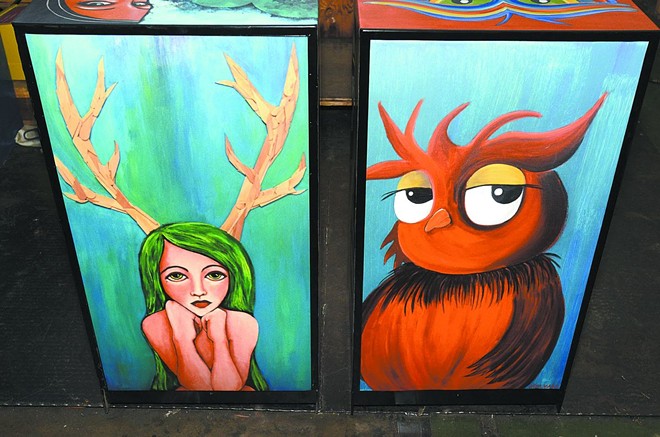 Inland360 will now be distributed in several locations for free as well as in the Lewiston Tribune and Daily News newspapers on Thursday's.
click to enlarge

Inland360 will now be distributed in several locations for free as well as at the Lewiston Tribune and Moscow-Pullman Daily News offices.

Several Inland 360 readers have already inquired about some of the new art installations popping up in the Quad Cities.

The black newspaper racks are adorned with works by regional artists as part of a comprehensive effort to expand 360's reach.

The weekly publication is now available at the racks, as well as more than 40 other locations in the Quad Cities.

Here is a quick rundown on some of the contributing artists:

Sarah Bailey is a 17-year-old Pullman High School senior from Palouse. She's inspired by the texture and movement seen in Vincent Van Gogh's paintings. Her artwork, titled "Respite," can be seen at the Main Street Mart in Pullman.

Shyann Skalicky is an 18-year-old Lewiston High School senior. She enjoys oil painting as a hobby and plans to pursue a degree in business. Her artwork is on display in front of Thomas Hammer Coffee in Pullman.

Ethan Coy is an 18-year-old Lewiston High School senior who enjoys painting with oil and acrylics. His art can be seen in two locations: in front of the Blue Lantern in Lewiston and in front of Thomas Hammer Coffee in Pullman.

Mckenzie Lee is a 17-year-old senior at Lewiston High School. Lee enjoys oil painting, and her artwork can be seen in front of Thomas Hammer Coffee in Pullman.

Jesse Hughes is a 34-year-old Lewiston resident whose art is inspired by the impressionist period. Hughes is influenced by the works of Van Gogh and Rembrandt. His artwork, titled "Time is of the Essence," can be seen at Wasem's in Clarkston.

Duke Richardson was born in Petaluma, Calif., and is a 17-year-old junior at Moscow High School. He is inspired by surrealism artists like Salvador Dali and M.C. Escher. His artwork, titled "The Drip," can be seen at Cafe Artista in Moscow.

Mark Bonnallie is a 35-year-old Lewiston resident whose artwork is inspired by neo-expressionism artist Jean-Michel Basquiat. Bonnallie's work, titled "Pieces of Me," can be seen at the Moscow Food Co-op.

Sarah Davenport is a 32-year-old Lewiston resident. She is inspired by digital artists like Sarah Jarrett. Davenport's art can be seen at the University of Idaho Bookstore in Moscow.

Moriah Hale is a 24-year-old Kooskia native studying to be a paralegal at Lewis-Clark State College. Hale draws inspiration from Van Gogh and Monet. Her artwork can be seen at the LCSC Library in Lewiston.

Jaymee Laws is a 42-year-old Lewiston resident. She enjoys painting with acrylics and uses Frida Kahlo's work as an inspiration. Laws' art can be seen at the Lewiston City Library.

Myndie VanHorn is a 42-year-old Clarkston resident. Her favorite artists include Kahlo, Dali and Gustav Klimt. Her three pieces of art, titled "Federick III," "Oscar" and "Jimmy the Left-hander," can be seen in Brackenbury Square in Lewiston.

Others who submitted their artwork for the project are Coty Coppess and Destiny Hughes, both of Lewiston.