It’s not yet curtains: Facing an uncertain future due to higher education funding issues, the Idaho Repertory Theatre offers a condensed season

MOSCOW — Last year the Idaho Repertory Theatre, one of the Northwest’s oldest professional summer theater companies, celebrated its 60th anniversary at the University of Idaho. This summer the program nearly went dark.

In the past, IRT has offered a summer smorgasbord of plays, up to five fully staged productions with costumes, lighting, sets and professional actors. This year’s season is a winnowed version of its former self, with two staged readings and only one fully staged performance. The diminished season is the result of uncertainty surrounding Focus for the Future, the prioritization process underway at Idaho’s higher education institutions, says IRT Artistic Director Ann Hoste.

In 2013 the Idaho State Board of Education mandated that the state’s higher education institutions review and evaluate the sustainablity of all academic and nonacademic services and programs. IRT is one of around 400 UI programs under the lens.

Hoste says she was advised last fall by the then interim dean of the College of Letters Arts and Social Sciences, John Mihelich, to suspend IRT’s regular summer season because they didn’t know how long the process would last. In the past the UI has fronted IRT operating funds in advance of each season. It was unclear whether that money was coming, Hoste says. 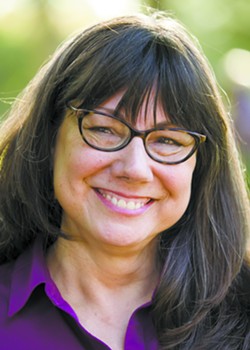 Planning for the summer season begins in the fall. The rights to plays must be acquired. There are travel and housing arrangements to be made for actors, crew and staff. In 2013, a crew of about 70 people created 23 performances over four weeks, Hoste says.

Rather than let IRT go dark for the summer she decided to plan a series of fundraisers. The season opens Friday with a reading of “Happy” by professional actors at the Kenworthy Performing Arts Centre, to be followed July 12 with a reading of “The Lion in Winter” at Meadowinds Castle outside Moscow. The family play “Tomato Plant Girl,” opening July 10, will be fully staged by volunteers in nine performances at the UI Hartung Outdoor Theatre. It’s lower cost for the theater because staged readings do not include sets or costuming and actors are only present for a few days.

After she moved forward with the condensed season, it was confirmed that IRT would not receive any front money this year, Hoste says. She understands the position the university is in and is “waiting to find, ultimately, what form university support will take in the future.”

“It’s death to an arts organization not to be in the public eye,” says Dean Panttaja, department chairman of Theatre Arts at UI and executive director of IRT. He sees the fundraisers as a way to stay visible. “We definitely plan to be back next summer with a full season,” Panttaja says.

Hoste believes that if the community values the theater, it is vitally important to show support at this year’s fundraisers. The 2013 season drew 2,749 patrons, averaging about 119 at each performance. Ticket sales will never cover the costs of production, she says. Along with the university’s support, the IRT relies on a loyal base of business and individual community donors. She wants them to know why this season is so different from those past.

“What the community needs to do is buy its art, support its art,” says Robert Caisley, UI theater professor and playwright. “Art has never paid for itself. It requires patronage, particularly in the current economic climate. People think art will always be there, but it will disappear if it’s not supported.”

That has happened across the border in Pullman where Washington State University eliminated its summer theater program and, in 2011, its theater and dance department.

Administrators said their hands were tied by unprecedented cuts to higher education by the state Legislature. Professors charged administrators with devaluing the humanities for more lucrative fields like science.

Another challenge facing theaters across the country is an aging audience. Live theater competes with countless entertainment options for younger audiences. Youth workshops were once a part of IRT but Hoste says they are no longer in a position to pay an education director.

Focus on the Future recommendations were released this spring for academic programs. They include investing in a program, taking no action, putting it on a watch list, consolidating, suspending or eliminating it. IRT is a nonacademic program and its recommendation has yet to be released, nor has permission come to move forward with business as usual.

While the summer theater’s importance to the UI is being evaluated, Hoste says IRT is also revaluating its mission.

“No matter what happens with funding for (IRT) we need to review our mission and come up with new ideas for the future,” she says.