"Les Miserables" makes its premier at the Lewiston Civic Theatre

Barry Kough
The cast of "Les Miserables" at the Lewiston Civic Theater include members of multiple families. (From left to right) Among the ensemble, Jon Lane shares the stage with his son Frank, 7, wife Kelly Riddle, and son Paul, 5. Kai Klempel, 8, stars as the young Eponine while her brother, Amos, 10, plays Gavroche and her mother Amanda plays multiple roles.

“Everybody that’s ever done theater has been waiting to do this play,” says Fred Dole, who is directing the production opening for the first time in Lewiston Thursday, May 22 (details below).

The musical was also on Dole’s bucket list. The retired Clarkston High School band director last oversaw 2012’s “A Tale of Two Cities” at the theater.

“I’m not too sure I would have come out of the house for anything else,” he says.

When the musical first became available to community theater groups in 2013 it was quickly snatched up. It was performed last fall by the Spokane Civic Theatre and in April by Regional Theatre of the Palouse in Pullman.

Dole and set designer Jim Faul began constructing the Parisian cityscape set in early December in a barn in the Lewiston Orchards. Voice coaches have worked extensively with the cast of about 55 people. Behind the scenes, more than 1,000 costumes were created for peasants, farmers, prostitutes, street urchins, police officers and gentry. A full orchestra will provide music for the production.

“This is a great play for the ensemble,” Dole says about the array of characters in “Les Miserables,” which requires men, women and children of all ages. Several families star in the production.

Amanda Klempel of Lewiston plays multiple roles in the ensemble. She’s sharing the stage with her two children. 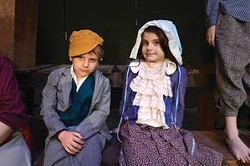 Amos, 10, plays the street urchin Gavroche; daughter Kai, 8, plays the young Eponine. Amos has participated in the theater’s youth program but this is his and his sister’s first main stage appearance.

“I think theater is so important for building teamwork, dedication and confidence,” says Klempel, who often works behind the scenes in the costume department.

Theater is her escape, she says, “I’m sharing it with them.”

“We get to stay up really late,” says Kai, with a smile.

With their two boys, Paul, 5, and Frank, 7, Kelly Riddle and Jon Lane of Clarkston form another stage family. The boys are street urchins while their parents play multiple ensemble roles.

“They love it,” says Kelly Riddle. “When they grow up they want to be teachers and be actors and in a band on the weekend.”

“Les Miserables,” one of the world’s most popular musicals, is a sweeping tale of suffering, sacrifice and redemption based on the 1862 book by Victor Hugo. Here’s the plot and the cast:

Nathanael Tucker of Lewiston plays Jean Valjean, a former convict who devotes his life to good.

1815 — After 19 grueling years on a chain gang for stealing bread for his sister’s child, Jean Valjean (Nathanael Tucker) learns that his parole documents condemn him to life as an outcast. When the Bishop of Digne offers a helping hand the bitter Valjean steals from him. He is caught and astonished when the bishop lies to the police to save him. He vows to start a new life, although he will never be forgotten by inspector Javert (Tony Rosetti).

1823 — Valjean has broken his parole, changed his name to Monsieur Madeleine and is now a mayor and factory owner. One of his workers, Fantine (Mel Syverson), has a secret, illegitimate child and when co-workers discover this she loses her job. In desperation to support her child, she sells her belongings, hair and body. Her path crosses Valjean’s and at her death bed he promises to care for her little daughter Cosette (Sophie Canner). He finds Cosette living with the cruel Thénardiers (Paul Fuson/Jennifer Opdahl) who abuse her while indulging their own daughter, Eponine (Kai Klempel). Valjean pays them off and takes Cosette to Paris.

1832 — Food shortages, harvest failures and cholera have devastated Paris, especially the poor neighborhoods, and people are rising up against the government and the wealthy. Eponine (Kaarin Vander Plaats) has fallen in love with a student named Marius (Isaac Ryckeghem), who, in turn, loves Cosette (Amy Stedman). While her father’s gang robs the city’s rich, Eponine agrees to help Marius find Cosette. Marius and Eponine join the revolution and all are swept up into a tide of violence where mercy and truth struggle to prevail.