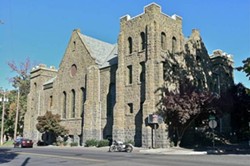 The Lewiston Civic Theatre is housed in a church more than a century old.

The Lewiston Civic Theatre is collecting donations to restore two stained glass windows that have been removed from its century-old building.

Two windows were removed this month and are in Portland, Ore., where they will be restored by the David Schlicker Stained Glass Studio. Each window will cost $3,000 to $4,000 to restore, says Beth Larson, the theater’s executive director. The theater is working with the Idaho Heritage Trust and Historical Preservation Commission to get grants for the restoration, but matching funds are needed.

The theater is housed in a former Methodist church and stained glass windows surround the building. The two windows removed were had gaping holes and pieces falling out.

“Over 100 years and all the weathering, that’s a lot of wear and tear. It’s time to start taking care of them,” said Larson.

Repairs will take about six months and the windows are expected to be reinstalled in March 2014. Donations can be sent to the theater at 805 Sixth Ave., Lewiston, ID 83501.