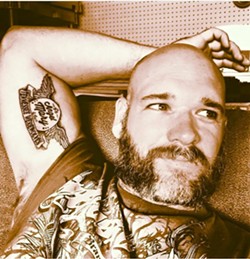 Don Nickles was just another guy goofing around on the Internet until social media carried him away to Nashville.

Nickles, 35, is a manager at the Humane Society of the Palouse in Moscow but he’s also an aspiring comedian with an alternate persona named Redneck Don on social media.

Redneck Don can be found on YouTube and other social media outlets telling tall tales and jokes in the spirit of Lewis Grizzard and Justin Wilson, comedians Nickles grew up listening to in Macon, Ga.

“It’s an intensified version of who I am,” said Nickles, who lives in Troy with his wife, Peggy Lynd.

Redneck Don struck a chord with an up-and-coming Nashville band that approached Nickles a year ago to do a weekly bit for their YouTube channel.

The group, Angel Mary and the Tennessee Werewolves, is a family band featuring Mary Wolf on lead vocals, brother Christian Wolf on drums and father Antoine Wolf on vocals and guitar. New videos for "AMTWs Howling with Redneck Don" are posted on Wednesdays. In August the band flew Nickles to Nashville to appear in a music video for its song, “Ramblin’.” (Find videos below.)

“I was shocked,” Nickles said about the opportunity. “For one, I’ve never been on an airplane, ever.” 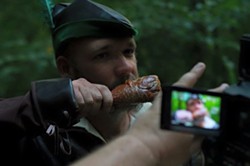 Nickles plays a turkey leg eating henchman in the music video for "Ramblin'.".

The video is a fantasy set in a forest. Nickles plays a henchman dressed like Robin Hood eating a turkey leg. Other people appearing in the video include William Lee Golden of the Oakridge Boys, Doug Phelps of the Kentucky Headhunters and Robert Reynolds of the Mavericks; all members of bands Nickles grew up listening to and got to meet face to face.

Since the music video was released last month, Nickles said he has heard from other rising artists and clothing companies interested in his act.

He said the band would ultimately like him to tour with them to open their shows.

Nickles works to keep his act family friendly. He doesn’t curse or go for shock value. One of the most humbling things about his experiences so far is the number of young people between the ages of 10 and 16 who tune in, he said.

“It definitely puts more weight on my shoulders to maintain a straight and narrow path for these kids looking up to me,” he said.