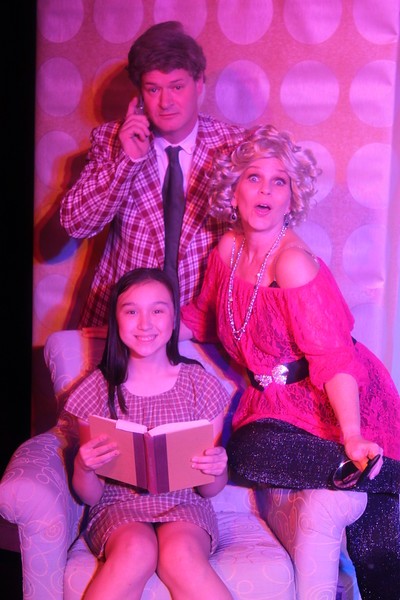 Ben Edgerton and Laura Child play Mr. and Mrs. Wormwood with Natalie Clark as Matilda in the Regional Theatre of the Palouse production “Matilda.” Matilda is also played by Lorelei Rideout.

Roald Dahl’s “Matilda the Musical” opens tonight at the Regional Theatre of the Palouse in Pullman. The Tony Award-winning show is based on the book “Matilda,” which follows a young school girl with psychokinetic powers and a love of knowledge. Inland 360 caught up with actress Laura Child of Pullman who plays Mrs. Wormwood, Matilda’s cruel mother.

What do you do for a living/when not working with the theater?

I raise funds for the College of Arts and Sciences at Washington State University.

Why did you want to take part in this play?

I love the musical and really wanted to play the part of the mean mom. Both of my daughters are also involved. My oldest daughter, a sophomore at WSU, plays Miss Honey, the sweet school teacher. My younger daughter, a junior at Pullman High School, is the choreographer for the show.

What other roles have you acted in?

I have mostly played ensemble roles. The shows I have been in are “Annie,” “Sound of Music,” “Oklahoma,” “Anything Goes,” and “All Shook Up.” All of the shows were done with my daughters.

What is your favorite part about playing Mrs. Wormwood?

She is just obnoxious. She says things I would never get away with saying in real life. Plus, I have this smoking hot dance number!

Besides yourself, which actor in this production is going to blow people away?

The whole cast is really amazing. It would be hard to pick just one. The Matildas both work very hard and of course, Miss Honey is amazing.

If you could portray any character in a play or a movie, what character would it be?

I would have loved being cast in the “Oceans 8” movie -- such an amazing cast of women.

WHAT: “Matilda the Musical.”

WHERE: Regional Theatre of the Palouse, 122 N. Grand Ave. Pullman.