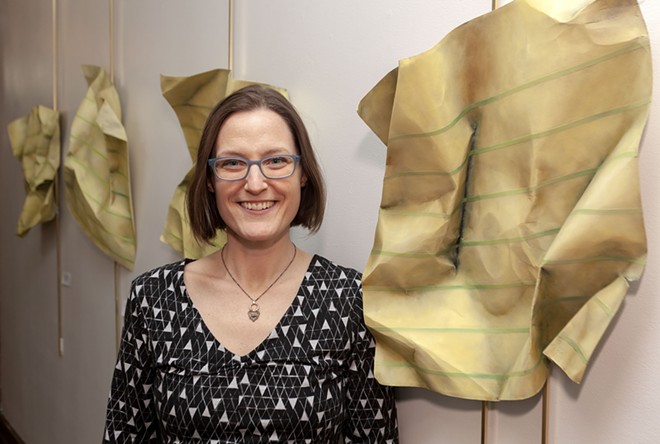 Geoff Crimmins photo
Megan Cherry is the new arts program manager for the city of Moscow. Cherry is seen here with pieces from her 'Post-It Apocalyptic' series, on display at the Third Street Gallery in Moscow City Hall.

Many elected officials see the arts as a want, not a need, but Moscow didn’t conform to that line of thinking.

In 1978, the city established the Moscow Arts Commission to make recommendations about public art and arts programs to the city council. Forty years later, the community is feasting on the fruits of that decision, which helped create a robust farmers market voted among the best in the state, a spring artwalk that attracts hundreds, a public art fund that has beautified the city and a gallery in city hall that has showcased Smithsonian exhibits.

The volunteer commission works with a paid arts program manager. Megan Cherry, 38, accepted the job in November, taking the place of Kathleen Burns, who retired after 11 years at the post. People are invited to meet Cherry and Moscow arts commissioners tonight at city hall, where an exhibit features artwork by many of them. A panel discussion will follow a reception.

Inland 360 spoke to Cherry, an artist who resonates with many different kinds of work.

“Work is not a bad word to me,” she said. “My days are full, and they’re purposeful.”

Cherry grew up in Sandpoint and Hope, Idaho. She earned undergraduate degrees at the College of Santa Fe, N.M., where she double majored in set design for live theater and visual arts with an emphasis in sculpture.

“That spirit of the artist is always going to drive how I act and how I reason through a question here,” Cherry said.

Cherry visited the University of Idaho Lionel Hampton Jazz Festival with her high school choir. She earned a master’s degree from UI’s fine arts program in 2015.

“Moscow is a place where talent wants to live,” she said about the decision to relocate to Moscow. “We don’t move to a city just to get a job.”

“I advise them: don’t succumb to the stereotype (of the scatter-brained artist), get tidy.”

On the personal side:

Married to James Cherry, a woodworker who makes custom furniture. The couple owns a 15-acre slice of land in Bonner County that is part of the Idaho Forest Stewardship Program. In their free time, they thin trees and plant native grasses and flowers that encourage pollinators.

“As an artist, I’m painting things green. I don’t know where the science starts and the art stops, and I love that ambiguity.”

On taking on the role of Moscow’s arts program manger:

“I want to see one of everything in the year before I start to make changes. This program has elements near and dear to the community. The last thing I want to do is alter that before I see how it functions.”

WHAT: Meet the Moscow Arts Commission and the Arts Department