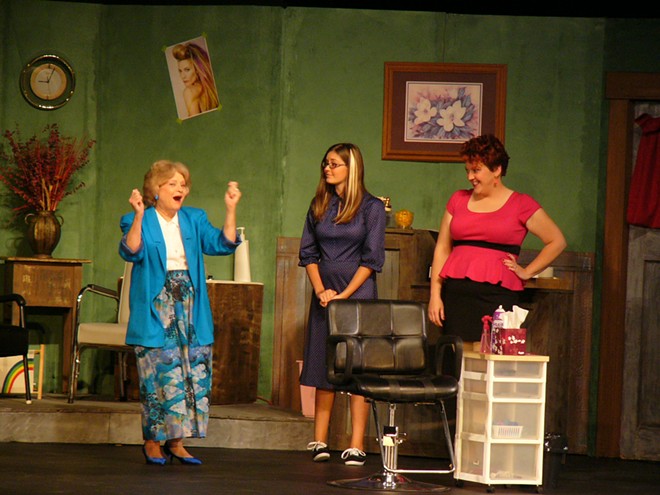 The organization celebrates its 40th birthday this year. It gained nonprofit status on July 12, 1978. The theater is celebrating the milestone Friday at a reception following the opening night of “Audition for Murder,” a comedic straight play.

Longtime theater participants Roger Wallins and Kathy Dawes, both of Moscow, credit the theater’s beginning to Ed Chavez, a University of Idaho theater professor and director. He was both the “brains” and “sweat” behind its origins, Wallins said.

In 1976, Chavez gathered a few people together to perform the comedy “You Can’t Take It With You.” Wallins and his wife, Judy, were among them. At first Wallins didn’t want to be in it, citing stage fright, but he agreed to a small role. By the end of the show, he was already “outgrowing the stage fright,” Wallins said.

Next they did “The Good Doctor.” Then another show. And another.

“I think he realized the community needed a theatrical outlet,” Wallins said, speculating about Chavez’s reasons for starting the community theater.

People in Moscow would come to the plays Chavez directed at the university, Wallins said, but none of them had a place where they could be involved in acting or building sets. If other community theaters existed on the Palouse, they were small and unknown by those in Moscow at the time. When Chavez started the community theater, anyone who so desired could be involved with theater.

Within a couple of years, the group became incorporated as a non-profit, allowing donors to receive tax benefits. Both Wallins and Dawes were involved in that process, along with several others.

The theater’s first musical didn’t take place until 1980, when the group performed “Oklahoma!” at the Moscow High School auditorium. The show went for two weekends, and every seat in the house was sold out at every performance. People came for the show, but they also came because they knew who was putting it on.

“It was Ed Chavez. Everybody knew that an Ed Chavez production was going to be superb,” said Wallins.

Wallins, who performed in “Oklahoma!,” remembers looking out at the audience during one of the songs.

“The whole audience was bouncing in rhythm,” Wallins said. Even the balcony was bouncing, which had him a little concerned.

The group went on to perform a number of shows -- “The Pajama Games,” “Fiddler on the Roof,” “Pirates of Penzance.” The theater did non-musicals as well, but Wallins recalls that it was the musicals that drew the big crowds.

“Ed’s specialty was the musicals, and we did all the fun ones,” Dawes said. Much of the success of these shows, she said, was because of Chavez’s ability to find “terrific music people.”

Dawes remembers hosting dinner theater productions, which were done “in the round,” with the audience seated at tables around the actors. These smaller, more intimate productions were a wonderful evening out, she said.

“Our fondest memories, since 1970 when we moved to Moscow, all involve Moscow Community Theatre,” Wallins said.

In all, Wallins acted in 25 shows before he and Judy retired from their work at UI in 2002. At that point, Wallins decided to try directing. In 2007, he directed “The Velveteen Rabbit,” which had a cast and crew that was 18 years and younger. He directed three additional shows.

Though he’s no longer involved in productions, he still gathers with friends he made during the years that he was. “We still laugh about all the crazy things that happened,” Wallins said.

Dawes remembers Wallins as a central part of the productions, both for his theatrical and comedic contributions. She suspects he was behind the rubber chicken that began to show up at dress rehearsals. It ended up in the picnic scene in “Oklahoma!,” in a bird cage in “Oliver!” and in a bed while Maria was singing “The Lonely Goatherd” in “The Sound of Music.” Everyone would laugh, except Chavez who was directing.

“I never put the rubber chicken in anything,” Wallins said.

He admits to owning a rubber chicken but his finger points back to Dawes’ husband, Dana.

Since its inception, the community theater has performed in a number of venues -- the Moscow High School auditorium, various churches, hotel dining rooms and at the UI. In 2000, Beth Kenworthy donated the downtown theater to the group, which later transferred ownership to the Kenworthy Performing Arts Centre. The theater holds many of its shows at the Kenworthy, but they are separate organizations.

In recent years, the theater has performed three shows a season, moving away from the big musicals. Instead, the group focuses on comedies and shows that address current events, said board member Aubree Flanery. In an effort to offer something different from other theater groups in the region and involve students from the community, the theater has produced some Shakespeare plays over the past few years. A lack of both funding and community involvement have presented challenges to the group.

“There are so many things operating against the theater these days,” Wallins said. He cited “new, instant means of entertainment” which he suggests don’t offer the fun and long-term value of more traditional forms of entertainment and art, which cost more, both in terms of time and money.

“The arts are expensive,” Wallins said, “but they’re worth it.”

WHAT: “Audition for Murder” and 40th Birthday of Moscow Community Theatre

TICKETS: At the box office or in advance at moscowcommunitytheatre.org or Safari Pearl in Moscow.

OF NOTE: A sequel to last summer’s comedy “Murder Inn,” “Audition for Murder” follows two friends, Grace and Doris, who have an accident on a deserted stretch of icy road. Unharmed, they seek help in an old grange hall which has been converted into a community theater. There, they encounter a love interest for one and a family connection for the other. The authors of the show, Keith McGregor and Howard Voland, will be in attendance Friday and honored at the reception following.