Play explores touchy question: Who will inherit the family farm?

Many people avoid discussing religion, politics and money but for many rural families there’s a topic that’s even more touchy: Who is going to inherit the farm?

The play “Map of My Kingdom,” on stage next week in Colfax and Moscow, explores ideas about land transition and planning for the future.

As a generation of farmers retire, they face questions about who will succeed them, what that person’s plans for the land will be and whether or not it will cause family strife.

The play was commissioned by Practical Farmers of Iowa and written by Iowa’s Poet Laureate, Mary Swander to help farmers understand the emotions at play in farm transitions, avoid conflict, and find peaceful, rational solutions. It features Actress Maria Vorhis as Angela Martin, a lawyer and mediator in land transition disputes who shares stories of the families she has worked with over the years. Some have relationships that dissolve, others find solutions that benefit not only each other but the land itself.

The show has been performed around the country and the performances in Colfax and Moscow are the conclusion of a tour through Oregon, Idaho and Washington.

Tickets are a suggested donation of $10 per person or $20 per family. People are asked to reserve tickets in advance. 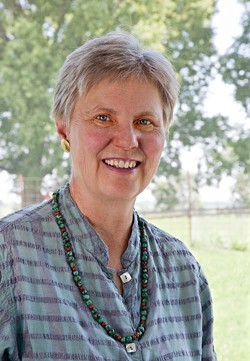 Mary Swander, Iowa’s Poet Laureate, was commissioned to write a play about the emotions and issues at the heart of the question, “Who will inherit the family farm?” She will speak after the Moscow performance of her play.