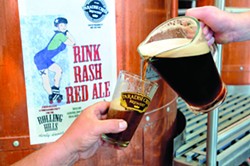 Similar to rug rash, rink rash is a painful red skin burn that occurs when a skater falls and slides playing roller derby. According to the Urban Dictionary, “Rink rash is most interesting when the rash includes the pattern of fishnet stockings,” apparel that is a common uniform in the sport.

The brewery, located in Pullman’s Old Post Office building, has a tradition of crafting a seasonal beer in support of a local entity, says the brewery’s creative director Scott Mackey.

Last year it was Grizzly Brown Ale for the Washington State University Bear Center. This year the Rolling Hills Derby Dames, whose players primarily come from Moscow and Pullman, will receive a portion of profits. Pullman brewer Tom Handy brewed seven barrels of the beer, the brewery’s first red ale, in February and it’s expected to last through the summer.

“Red ales are generally pretty malty so they’ve got a lot of nutty caramel flavor to them. That’s pretty much the main characteristic,” Mackey says. “It can be pretty hoppy, almost IPA hoppy. This one is going to be on the hoppy side.”

The beer will be released at 3 p.m. Saturday during an all-ages fundraising party and barbecue in the brewery’s parking lot and will feature the Moscow band Corn Mash.

Paradise Creek Brewery recently marked its second anniversary. Handy started as a home brewer who decided he wanted to make the craft his life’s work. In the past two years the brewery has produced two dozen different styles of beer and bottled five of them.

The Rolling Hills Derby Dames’ next event is the Black and Blue Freshmeat Scrimmage, featuring skaters new to the sport from around the Inland Northwest. Experienced skaters will act as refs and officials at the 2 p.m. June 16 bout at the Palouse Ice Rink in Moscow. Tickets are $5 and available online at brownpapertickets.com.

if you go What: Beer release fundraiser for the Rolling Hills Derby Dames When: 3 p.m. Saturday Where: Paradise Creek Brewery, 245 S.E. Paradise St., Pullman Cost: $3 cover for those age 16 and older. The event is open to all ages. Must be 21 to drink the beer.