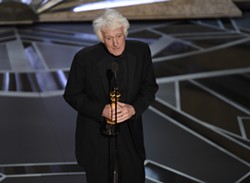 Photo by Chris Pizzello/Invision/AP
Roger Deakins accepts the award for best cinematography for "Blade Runner" at the Oscars on Sunday, March 4, 2018, at the Dolby Theatre in Los Angeles.

Roger Deakins finally got his trophy.

The 68-year-old filmmaker won the Oscar for best cinematography for “Blade Runner 2049,” his first win after 14 career nominations.

“I really love my job,” Deakins said during his speech.

“I’ve been doing it a long time, as you can see. But one of the reasons I love it is the people I work with. Some of my crew on Blade Runner I’ve been working with for 20 years. This is for every one of them.”

Deakins, who made documentaries early in his career, made his feature film debut in “Mountains of the Moon” in 1990.

He earned his first Oscar nomination in 1994 for “The Shawshank Redemption,” and racked up five more for collaborations with the Coen brothers (“Fargo,” “O Brother, Where Art Thou?,” “The Man Who Wasn’t There,” “True Grit” and “No Country for Old Men”).

Deakins has also been nominated for “Kundun,” “The Assassination of Jesse James by the Coward Robert Ford,” “The Reader,” “Skyfall,” “Unbroken,” “Prisoners” and “Sicario.”

Screen on the Green returns to University of Idaho campus