Stunning effects, if you can stay awake for them 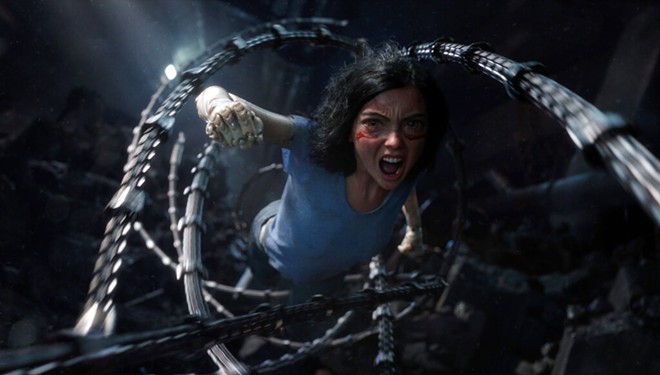 One-and-a-half stars out of four

“Alita” is produced by James Cameron, the visionary behind “The Terminator,” “Titanic” and “Avatar” — all films that pushed the limits of the special effects of the day. “Alita” is no exception. This time Robert Rodriguez (who has made a name for himself in visually-driven films such as “Spy Kids,” “Sin City” and “Grindhouse”) is in the director’s chair.

The world of “Alita” is full of cyborgs. The half-human, half-machine creations are magnificent to behold. Where the reality ends and the fiction begins is anybody’s guess. The film takes computer-generated images to a whole new level as characters move, live and breathe in stunning realism on the screen.

Unfortunately, nothing else in “Alita” reaches the same level.

The story begins when Dr. Dyson Ido (Christoph Waltz) finds a deactivated cyborg, Alita (Rosa Salazar). He fixes her up and when she comes to life again she has no memory of her past. The film follows her as she discovers who she is and her purpose.

This discovery leads to many fights, mostly with other cyborgs, in scenes where the special effects really shine. Alita’s movements are sleek and fast. Despite her small stature, she jumps, punches and kicks in ways no human could ever dream. Her moves are sometimes shown in slow motion so the audience can better see the hero’s athleticism.

However, after the action, there’s still a story to be told — or at least there should be. The fighting does nothing to move the story forward. Instead, the narrative jumps around like a kid in a candy store trying to decide what to buy, enticed by everything.

Potential directions the movie could have taken, but didn’t include: the blossoming father-daughter relationship between Alita and Dr. Ido; a love story between Alita and a human named Hugo (Keean Johnson); bounty hunters after Alita; and Alita and motorball, a sport that combines roller derby, football and NASCAR.

None of these leads last for more than 30 minutes before they’re dropped for something else, sometimes being picked up later with no resolution. This makes the wonder of the world lose its luster, and the last act of the film is a total snore fest as the viewer waits for something, anything, significant to happen or for the film to finally end.

Before the credits roll, the audience is promised a sequel to tie up the loose ends. In doing so, “Alita” crams one more unwanted plot development down the audience’s throat before it leaves.

On the outside, “Alita: Battle Angel” looks good, like a fun futuristic, special effects-laden action flick. Look inside and you realize there’s a lot of missing parts — most notably a workable story, without which no movie can function.