'The House with a Clock in Its Walls' dabbles in magic, but isn't magical 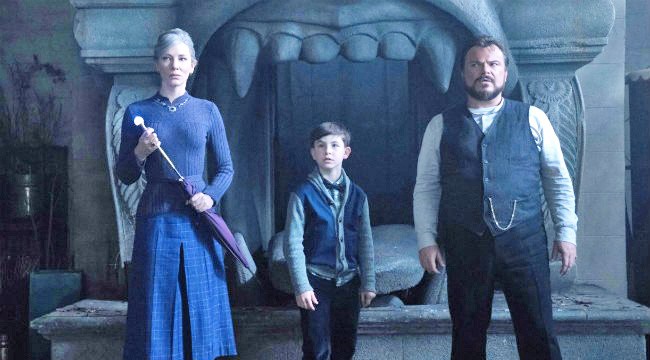 “The House with a Clock in Its Walls” tries to check off the necessary boxes for a good family-friendly film, but strikes out.

When Lewis’ (Owen Vaccaro) parents die in a car crash, he is sent to live with his eccentric uncle Jonathan (Jack Black).

Lewis soon discovers his uncle is a warlock, that the house he lives in is magical and that their neighbor, Florence (Cate Blanchett), also has magical ties.

This creates an exciting new home for Lewis, until he is the told of the mysterious and dangerous clock in the walls of the house. The clock keeps counting down, and no one knows what will happen when it finally strikes one.

The film is based on a book of the same name by John Bellairs, and it shows. Certain elements of the film are never fully developed and don’t seem to fit in the overall story. Among these are scenes showing Lewis at school, dealing with fitting in, finding friends and facing bullies. These seem to distract from the main plot of Lewis’ magical education and solving the clock mystery.

The magic is where “The House with a Clock in Its Walls” succeeds, providing the film with a playful sense of wonder. The house has a personality that gets more than a few laughs as chairs behave like dogs and the shrubbery acts like a cat with a mind of its own.

However, that light-hearted magic quickly turns dark in the second act when the film changes from a fun, family romp to a mild horror movie. It’s too tense for younger kids, too light for teens.

The story and tone are only the beginning of what’s wrong with “The House with a Clock in Its Walls.” The film’s special effects could be better. Some are dazzling and make you believe in the magic they represent. Other times — mostly when it comes to the various creatures — they look and feel like the fake Computer Generated Images they are.

The acting could be improved as well. Black is a bit too over the top. Some of the emotional scenes end up flat, aside from Blanchett. When she comforts Lewis or chastises uncle Jonathan, you believe it.

“The House with a Clock in Its Walls” starts off with the promise of Harry Potter-style fun, but quickly turns into a gothic horror that you didn’t expect or sign up for. It feels uneven and uncertain about what kind of movie it is. So, whether you are looking for something light-hearted or something with a darker tone, better find something else to suit your craving.