'Three' for all: Classic 'Musketeers' opens on valley stage 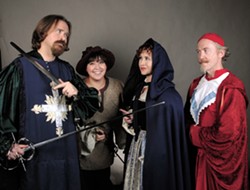 Tribune/Barry Kough
Players in the Three Musketeers production by the Lewiston Civic Theater include Matthew DeBerard as Athos, Kayla Comer as Sabine, Rebecca Hardin as Milady and Paul Segren as Cardinal Richelieu.

Adapted from the classic tale by Alexandre Dumas, the play follows d’Artagnan (Ethan Smith of Clarkston) as he sets off for Paris in search of adventure. He is joined by his sister Sabine (Kayla Comer, Lewiston), who poses as his young male servant and is quickly caught up in her brother’s antics. When they reach Paris, the two encounter the famous musketeers — Athos (Matt DeBerard, Clarkston), Porthos (Ethan Antram, Clarkston) and Aramis (Micheal Keene, Lewiston) — and d’Artagnan joins them to defend the honor of the Queen of France. Doing so, however, puts him in opposition to the dangerous Cardinal Richelieu (Paul Segren, Lewiston) and Milady (Rebecca Hardin, Clarkston) and trouble ensues.

“There’s a lot of action, but also a lot of humor,” director Larry Goodwin said.

The family-friendly show is rated G and is reminiscent of the 1973 film version of the story, Goodwin said.

This is the second show the Lewiston Civic Theatre has performed at the Clarkston High School auditorium since their building was condemned in August. Goodwin, who is also the drama adviser at Clarkston High School, said production has gone well despite the challenges with not having their own stage.