UI takes audience virtually behind the scenes of latest production 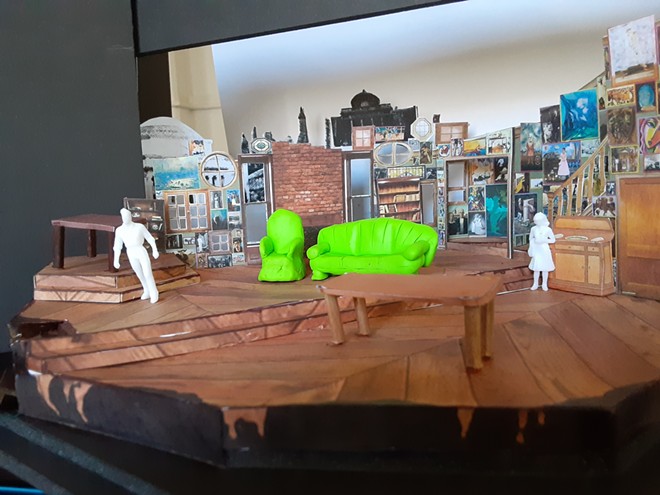 A model for the set of UI's production of "You Can't Take it With You" created by Megon Inmon.

University of Idaho students and faculty had already completed designs for their spring production of the classic comedy “You Can’t Take it With You” when COVID-19 precautions shut down the entire production.

Instead of scrapping months of work, directors will take audiences on a behind-the-scenes tour of the design process at 6 p.m. Thursday via the video chat room Zoom. The play’s director, Craig A. Miller, will lead the discussion, with set designer Megan Inmon and costume designer Darrell Wagner showing and talking about their work. The program is geared toward general audiences, said Robert Caisley, the department’s chairman.

Theaters across the country are exploring new ways to reach audiences during social isolation, he said.

“Everyone is sitting at home twiddling their thumbs. There’s only so much ‘Tiger King’ you can take,” he said, referring to the Netflix documentary that has become a pop culture sensation during the pandemic.

Many UI theater graduate students already study from a distance online, Caisley said. Wagner, for example, lives in Casper, Wyo., and was planning to travel to Moscow for performances. Many are now seeing online services as an opportunity to reach audiences, Caisley said. He believes American theater will look different at the conclusion of this period of social isolation.

Costume design for the character of Penny in "You Can't Take it With You" by Darrell Wagner.

“Smart companies are going to hold onto some of these community engagement programs and use the digital space to reach other constituents,” he said.

He also thinks theater will enjoy a renaissance when people emerge from their homes with a new understanding of the value of communal experiences. Watching a story unfold live on stage while surrounded by others will have new value to people, he said.

Livestreaming presentations like theirs also offers audiences the chance to ask questions they don’t normally get to ask when they come to the theater, he said. “It’s an opportunity to see the process itself and get inside the process.”

Caisley is planning more livestreamed events during the pandemic, but theaters face challenges in terms of presenting licensed material, he said.

“Typically when you license a production, you aren’t allowed to record it in any fashion,” he said. Playwrights, actors and others are in discussions now with publishers and guilds to work out new rights for streaming events. Some are more progressive than others, he said.

“I think this event is going to change the way playwrights and actors are compensated for their work. It’s kind of an interesting turf war going on right now in the industry,” he said. “Right now, every actor in the U.S. is sitting at home wondering if their career is over. It behooves them to find the middle ground, if nothing else, until we get through this epidemic.”

WHAT: “ ‘You Can’t Take it With You’ Virtual Designs Presentation.”