Unlocking the Vault: They said I could keep my stapler 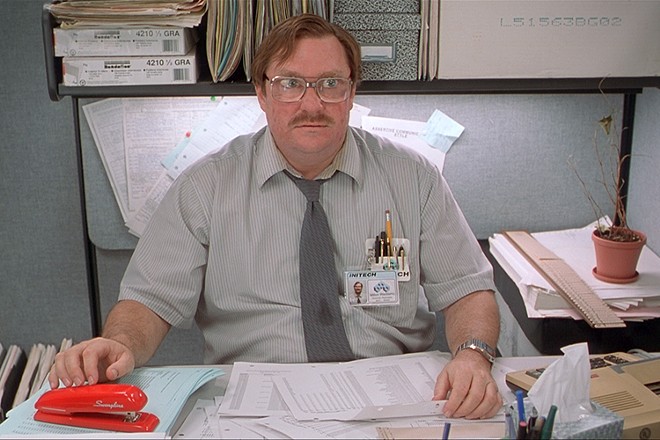 "Office Space" is a classic 1999 satire about American office life.

I had my first writing job in 2002. At the time, I also worked as a janitor at a local grocery store. One day, I was in the magazine office and I got a call from the store’s assistant manager asking if I knew I was scheduled to work that day. I didn’t know, and I wasn’t going in.

I knew that day would come. In fact, I had prepared for it the night before by watching “Office Space,” Mike Judge’s 1999 workplace comedy. The more I think about it, the more I’ve come to believe that “Office Space” just might be THE great American comedy.

Set in Texas, the movie features a cast of characters who all hate their jobs. They deal with traffic, potential layoffs, mismanagement from bosses, actual layoffs, and the fallout from a “Superman III”-inspired embezzlement scheme.

You know, the same kind of stuff you and I deal with on a daily basis.

So I’d watched “Office Space” and then quit my day job sweeping floors and cleaning bathrooms at the grocery store. I focused on writing and the money poured in.

OK, that last part isn’t true, but you know what? It didn’t matter. Like Peter Gibbons, the hero of “Office Space,” I found happiness in doing what I loved instead of what society and pressure told me I should do. If I hadn’t left the grocery store, I wouldn’t be where I am today.

I’ve had my share of jobs, both fulfilling and frustrating, since then. I’ve had good bosses, bad bosses and bosses who I never even spoke to. And almost without exception, I’ve known the end was coming by a desire to watch “Office Space.”

The message remains the same: happiness and fulfillment mean more than money (yes, there are bills and food and other living expenses; those things still need to be paid). Sometimes you have to ask the question: what would you do if you had a million dollars?

Sure, I’d watch movies and read books. I’d listen to old music and sometimes new music. But I’d do that so I could write about those things.

Peter Gibbons chose to work outside on building sites (the first we see of him in his new life is cleaning up the burned down remains of the software tech building he used to work at), and be a blue collar hero.

He didn’t need a movie to tell him to enjoy his life, but it certainly helps the rest of us. I’m not telling you to quit your job, or even to slack off. What I am saying, with the help of “Office Space,” is that you should go out and do things that make you happy. For the most part, the world will be a better place for it.

T.J. Tranchell is an author and freelance journalist in Moscow, Idaho. His new book “Asleep in the Nightmare Room” is now available. He’s had a lot of jobs in his life. How many have you had? Let’s talk: tj.tranchell@gmail.com