Art exhibits and lectures lead the way this week, but there also is an Oktoberfest on tap to kick off the month.

The work of photographer David Paul Bayles — whose art focuses on landscapes where the needs of forests and human pursuits often collide and sometimes coexist — will be on display this fall at the University of Idaho’s Prichard Art Gallery in Moscow. The exhibit, which features the series “Sap In Their Veins” and “Falling Trees,” opens with a reception from 5-7 p.m. Oct. 4 at the Prichard.

Bayles will speak about his work at 5:30 p.m. Oct. 3 in Room 122 of the Engineering and Physics Building on the UI campus.

“Sap In Their Veins” combines intimate portraits of loggers and their families along with textual oral history excerpts, according to a news release. The second of the series on display, “Falling Trees,” captures the moment when a tree is transforming from tree to lumber.

Bayles’ photographs have been published in magazines, including Orion, Nature, Audubon, Outside and the L.A. Times Sunday Magazine. His book, “Urban Forest, Images of Trees in the Human Landscape,” was selected by the Christian Science Monitor as one of its seven favorite books of 2003. The David Paul Bayles Photographic Archive was created in 2016 at the Bancroft Library at the University of California at Berkeley to archive his life’s work.

The 20th annual Historical Museum at St. Gertrude Fall Lecture Series begins at 7 p.m. Oct. 3 with a presentation by author Lin Tull Cannell titled “Intermediary: William Craig Among the Nez Perce.” This first of four in the series will be in the Johanna Room at Spirit Center at the monastery in Cottonwood.

William Craig immigrated to the region from Virginia, became a friend of the Nez Perce and served as an interpreter. He married Pahtissah, daughter of Thunder Eyes, and settled with his Nimiipuu family along the Clearwater River and Lapwai Creek in what is now Idaho, according to a news release. Cannell’s presentation will include photos and illustrations of some of the people Craig and his wife knew, as well as the country during the settlement period of the interior Northwest. Craig Mountain is named for him.

Tull Cannell was born in Coeur d’ Alene and raised in Lewiston. After retiring from working as a senior analyst in Yolo County, Calif., she and her husband, Merk, returned to live in Orofino. She has spent more than 15 years researching Craig.

All lectures begin at 7 p.m. and conclude at 8:30, followed by a question-and-answer session with the presenters. Light refreshments will be provided.

The monastery is at 465 Keuterville Road. 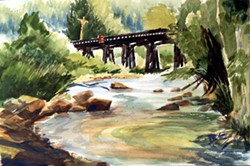 Ames lived in Moscow and worked more than 30 years as creative director of publications at the University of Idaho. After his retirement, he was able to begin painting full time, and after his death in 2004, he had completed more than 150 paintings and drawings.

The show will continue through Oct. 26, and a portion of any sales will go to the UI’s Leo Edwin Ames Arts Scholarship Endowment. Regular gallery hours are 10 a.m. to 4 p.m. Tuesday through Saturday.

Libations include 5-ounce tastes of the micros in a souvenir glass. A meal of German bratwurst, German potato salad and dessert will be served from noon to 3 p.m. The Auf Gehts German Band will provide live music.

The event will feature show-and-shines for unusual beer steins and bottle openers, as well as German cars, and an authentic German costume contest.

Cost is $20, and only 250 tickets will be sold. They are available at Smokes & Suds in Lewiston and Riverport Brewing in Clarkston.