How, and why, to wage war against goathead weed 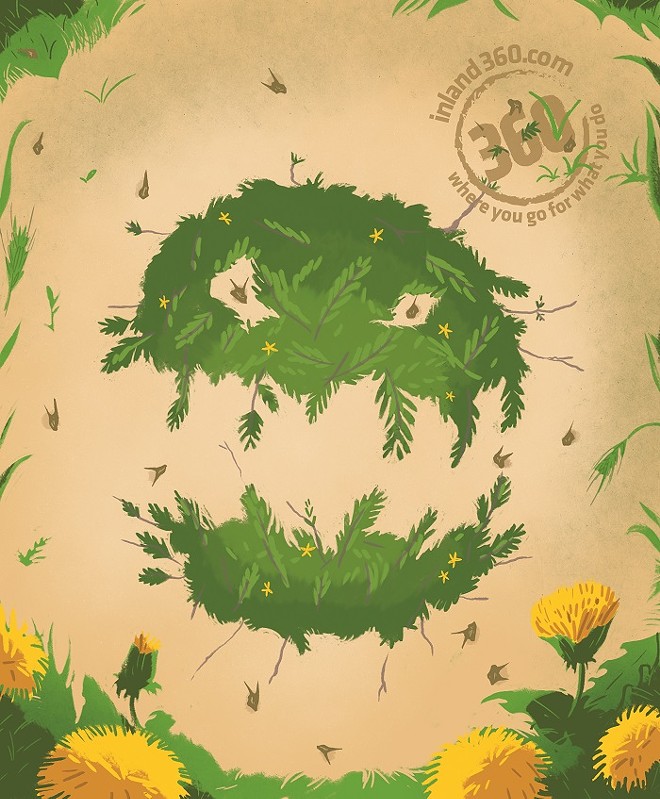 In the arid climes of the Northwest, a common enemy lurks below.

It’s the bane of bicyclists and barefeet, a sworn enemy of outdoor enthusiasts and farmers, an abuser of animals and livestock.

Like Lucifer, it goes by many names: puncturevine, goathead, bindii, devil’s eyelashes, caltrop, devil’s thorn -- to name a few.

Whatever you call it, the pain it causes is universal.

“It’s the great white shark of flora,” said Steve Dietz, who knows its tenacity better than most as as a purveyor and repairer of bicycles in the Lewiston-Clarkston Valley.

Eleven months of the year, you can ride a bike in the valley. With 25 miles of paved trails bordering two rivers, the valley levee system is a magnet for cyclists. Nearby rugged hill trails are another draw for locals and those from higher elevations where the weather isn’t so fair.

However, anyone who has ever ridden a bike in the valley knows a flat tire is just one goathead away.
Goathead-induced flats are more than a daily occurrence at Follett’s Mountain Sports in Lewiston. As manager there, Dietz has experienced all shades of rage from fuming cyclists, from the man who had to carry his toddler’s bike a mile to the car, to another who got two flat tires 35 miles downriver, to a group of professional racers from Coeur d’Alene whose $12,000 bikes were felled by a lowly crowd of thorns.

“It costs people more money and their kids more money to get out and enjoy the area we have. We have families that have quit cycling because of the frustration,” Dietz said.

In his 35 years at Follett’s, Dietz has explored myriad options for alleviating the pain, from government enforcement to specialty tires. It’s an issue outdoors-embracing communities around the West are tackling in new ways.

The warm, arid climate that attracts cyclists is also an ideal environment for puncturevine, which is classified as a noxious weed, an invasive species that crowds out the natives.

Puncturevine doesn’t grow everywhere in the Northwest (although climate change is expanding its reach). At this moment in May, hairy green stems are radiating out from tap roots in yards and vacant lots, along sidewalks and roadways. Five-petaled yellow flowers are starting to appear. Soon that innocent-looking flower blanket will morph into a carpet of nail-sharp seed pods biding their time until they can embed themselves into feet, paws and tires on their way to new territory.

“The problem with puncturevine is that the weed can thrive in compacted, shallow and all-around poor soil conditions. It is tolerant to drought and can produce viable seed within a month of sprouting,” said Doug Finkelnburg, area Extension educator with the University of Idaho Extension office. “A healthy puncture vine plant can produce over 1 million seeds in a season.”

Yes, you read that right. One plant can produce a million seeds. But it gets worse. Those seeds can remain viable for years. How many years is a point of debate among scientists. Estimates range from four to 20 years. Finkelnburg said it likely depends on conditions, but four or five years is common. That means that even if you remove an established plant, you’ll need to monitor the area for that long to know it’s gone for good.

“It’s truly a menace to pets, kids, bike and stroller tires,” said Finkelnburg, but that’s not the most frustrating part for him.

The most frustrating thing is that it’s not hard to kill. It’s very manageable, with a little work.

Defending Against the Invasion

Puncturevine is native to southern Europe and the Mediterranean. Theories about how it hitchhiked its way west abound.

According to who you ask, the first seeds may have arrived embedded in a shipment of European sheep, or with camels in a failed 1800s U.S. Army experiment, or they were planted on purpose around the old Idaho State Prison in Boise as a deterrent to escapees.

“Prisoners wear shoes, so the weed would not be much of a deterrent.”

She cites the UI paper, “How to Know the Weeds of Idaho,” which blames imported Russian red wheat.

While it’s interesting to ponder how it got here, it’s more productive to take action against it, and spring is the perfect time.

“The key to control is preventing it from going to seed,” Finkelnburg said.

Springtime, when the plants are small, is the best time to kill it by weeding, hoeing or spraying with a herbicide. If a plant already has burs, it should be removed and thrown in the trash or burned, he said.

“If you hate goathead thorn, don’t just hate them, do something about it,” said Dietz, who has taken complaints to city and county authorities.

Most cities and counties have protocol or some amount of funding dedicated to dealing with noxious weeds. In Lewiston, for example, people are encouraged to first speak to the land owner. If that fails, or they don’t know who owns the land, they can file a complaint with the police department or online at the city of Lewiston website, where you can submit photos and an address. According to officials, that complaint is forwarded to code enforcement officers, who then forward it to the county. County officials then contact the landowner, usually by letter, and offer information about how to control the problem.

If that doesn’t sound like the most effective way to address the issue, Dietz would agree.

While many landowners take action, others do not. And, Dietz notes, it’s not always clear whose problem it is when it comes to vacant lots, ditches, back alleys and trail shoulders. The levee system is federal land, so in that case the weed would be the U.S. Army Corps of Engineers’ problem, not the county’s.

“There’s a lot of gray area and nobody wants to take responsibility for it,” Dietz said.

It’s an issue around the West, and other communities are getting creative about solving it.

The Oregon cities of Irrigon and Milton-Freewater instituted bounty programs offering a $1 for every bag of puncturevine collected.

Milton-Freewater introduced the program last year and collected 95 bags, said the city’s code enforcement officer, Jason Schaffner. He deemed that a successful start and said the program will return this year.

The annual Boise Goathead Fest is a celebration of bicycle culture with a focus on spreading awareness about the puncturevine plague with costume contests and a goathead collection. Attendees can earn free drink tokens for collecting bags of the weed. The festival was started by the city and the Boise Bicycle Project, a nonprofit that donates 700 to 800 bikes to kids each year. Project organizers realized that half of those bikes had flat tires within the first six months after kids received them because of goatheads.

But What About My Flat Tire?

Back to the bike shop where repair technicians are performing “a blood test.” That’s what they call it when they run the fingers along the inside of a flattened bike tube looking for the offending object, usually a goathead. By summer’s end, when a new crop of goathead is ripe and cyclists are out in force, their hands are covered with wounds.

“We’ve been accused of planting it, seriously,” said Dietz with disgust. “We all ride bikes here.”

Dietz has investigated all kinds of solutions, ranging from preventative measures like durable tire liners, to cures like the tire sealant Slime, a fibrous glue that fills a small puncture after the object is removed and the tire is pumped up and quickly spun.

These things make a difference, but they’re no guarantee you won’t still get a flat, he said.

For a time, specialized bikes with foam tires seemed to be the solution -- but they proved to be unwieldy for riders and a nightmare when it came to repairs. He’s keeping tabs on a company in Europe that is attempting to make a better version.

He encourages people to report puncturevine patches to authorities because “the squeaky wheel gets the grease.”

It’s an epidemic, he said. “Enforcement or control, one way or another they have to get involved. This has to be a community, county, valley effort.”